This week we will watch Machuca which is part of The Smallest Latin American Festival and taken place in May all over the world.
Plot: Santiago, Chile, 1973: Pedro Machuca (Ariel Mateluna) is a poor boy of tribal descent, brought into an upper class private school during Chile’s brief socialist era. Gonzalo (Matias Quer), the well-to-do boy seated a row ahead, befriends Pedro against the bullying will of his classmates. In so doing, he discovers a raw, thrilling but wildly complicated world outside his own previously sheltered homelife. Pedro’s fierce, attractive young neighbor Silvana (Manuela Martelli) by turns mocks Gonzalo’s pampered background, only to fondly lead both boys in a number of kissing games. All around them, Chile drifts toward civil war. Protest marches fill the Santiago streets with zealots of the right and left. At school, their humane headmaster Father McEnroe (Ernesto Malbran) comes under an hysteria-driven attack by parents for his charity toward poor students.
... 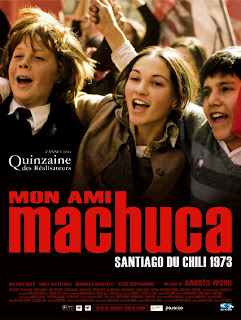