This drama named after a song by Robert Burns and directed by Ken Loach tells the story of Qasim Khan (Atta Yaqub). Qasim  is a Glaswegian DJ of Pakistani origin. His devout Muslim parents have arranged for him to marry his first cousin. Unfortunately, he has just fallen in love with his younger sister's music teacher, Roisin (Eva Birthistle). Not only she is 'goree', a white woman, she is also Irish and catholic, things that may not go down well with Casim's parents. They start a relationship but Qasim is torn between following his heart and being a good son.

The film won different awards, for example the Prize of the Ecumenical Jury at the Berlin International Festival.
"English-language East-West domestic dramas usually tip the scales in favor of modernity... But A Fond Kiss is equally sympathetic to each side". Stephen Holden. New York Times. 29/11/2004.
See the trailer: http://www.youtube.com/watch?v=ZRPNPUuGQEM
The song by Robert Burns: http://www.youtube.com/watch?v=ByMgD1ErF4k
Posted by Cinema Club at 06:10 No comments:

This film by Dominic Harari and Teresa Pelegri tells the story of a mismatched couple. Leni (Marian Aguilera) is a television reporter from a Jewish family in Spain. One weekend, Leni drops by her family's home for a visit, with her new boyfriend Rafi (Guillermo Toledo), a Palestinian college professor, in tow. 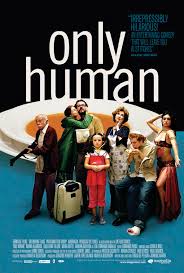 This movie won the award for the Best film at the 2004 Monte-Carlo Comedy Film Festival. Apart from that it was quite well received by the critics.
"Writer-directors Dominic Harari and Teresa Pelegri have penned an amusing script and, as directors, inject a delicate human texture into the story's intermixing of capricious zaniness, frank sensuality and Mideast politics." Desson Thomson. Washington Post. 15/02/2012.
See the trailer: http://www.youtube.com/watch?v=TEbixHEVmWY
Posted by Cinema Club at 04:28 No comments:

This Thursday, SEED (Sustainable Economy Education Developing) is going to collaborate with the Cinema Club. They will host The Four Horsemen.
This documentary has been directed by Ross Ashcroft and it lifts the lid on how the global economy really works. Living in the age of consequence unfettered growth and profit seeking have pushed humanity to the brink. Today's Four Horsemen - socially organised violence, debt, iniquity and poverty control all of our lives. They're gathering momentum, decimating communities and compromising future generations if they are not arrested the planet will gallop to a logical conclusion.
23 international thinkers, like Noam Chomsky or Joseph Stiglitz, come together and break their silence about how the world really works and why there is still hope in re-establishing a moral and just society. Four Horsemen is free from mainstream media propaganda, doesn't bash bankers, criticize politicians or get involved in conspiracy theories. The film ignites the debate about how we usher a new economic paradigm into the world which, globally, would dramatically improve the quality of life for billions.

More information about the film. http://www.fourhorsemenfilm.com/
Interview with the director:  http://www.youtube.com/watch?v=9H--0xHLOcQ&feature=BFa&list=SP07AE1842FAD6AC6E

This comedy-drama by Billy Wilder starring Jack Lemmon, who plays the roll of C.C. Baxter. Baxter  is a lonely office druge for a national insurance corporation in a high-rise building in New York City. In order to climb the corporate ladder, Baxter allows four company managers, on different evenings of the week, to take turns borrowing his Upper West Side apartment for their various extramarital liaisons that are so noisy that his neighours assume he is bringing home different women every night. 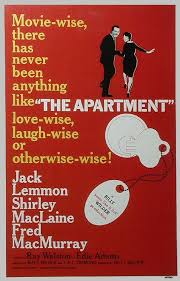 The Apartment received 10 Academy Award nominations and won 5 Academy Awardsat the 1960 Academy Awards, including Best Director and Best Motion Picture. Nowadays it is considered a classic.
"A comedy of men's-room humours and water-cooler politics that now and then among the belly laughs says something serious and sad about the struggle for success, about what it often does to a man, and about the horribly small world of big business. " TIME Magazine. 18/02/2009.
See the trailer: http://www.youtube.com/watch?v=B4OXm9-E8OQ

This film was directed by Mark Romanek and it is based on a book by Kazuo Ishiguro. Never let me go tells the story of Kathy H (Carey Mulligan), Tommy (Andrew Garfield) and Ruth (Keira Knightley). During their childhood, they were educated at a mysterious boarding school. Kathy watches from afar as Ruth and Tommy fall in love, but fate has a greater threat in store for all of them. 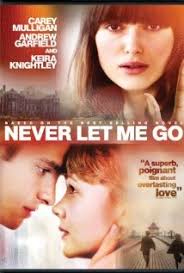 Carey Mulligan won the award for the Best Actress at The British Independent Award. The film was well accepted by the film critics.
"Lovely and melancholy, poignant and chilling, Never Let Me Go is an old school sci-fi dystopia with lovely, wistful performances that never quite overcome the fatalism that hangs over the whole affair." Roger Moore. Orlando Sentinel. 06/10/2010.