Directed by  Tetsuya Nakashima, the film tells the story of Momoko, a self-absorbed dreamer who fantasizes about fleeing her backcountry home and living life in 18th century Versailles. When she unexpectedly meets a rebellious Ichigo, a rough-and-tumble biker chick, the two misfits from a unique friendship. The fact they are so different makes them an unlikely alliance, but friends they become.

http://www.youtube.com/watch?v=QvTxyok0j2o
Posted by Cinema Club at 09:31 No comments:

A misfit macaw named Blu (voice of Jesse Eisenberg) takes flight from his Minnesota home and soars south on a quest to explore Rio de Janeiro in this animated adventure for the entire family. Along the way, he meets the last female blue macaw (voice of Anne Hathaway), and discovers what an amazing adventure life can truly be. RIO also features the voices of Leslie Mann, Jamie Foxx, George Lopez, will.i.am, and Rodrigo Santoro.

http://www.youtube.com/watch?v=Bf6zeRwk5LE
Posted by Cinema Club at 05:08 No comments:

In 1936, in the midst of rising Japanese militarization, a former prostitute, Sada, goes to work as a maid in a brothel. The handsome owner of the house, Kichizo, soon begins to court her, and Sada eagerly returns his attentions. Their subsequent affair and constant lovemaking grow more and more intense, and their sexual obsession threatens to destroy them both.
Directed by Nagisa Oshima, the film has explicit sex scenes. It was edited and registered in France in order to avoid the strict Japanese censorship regulations. Despite this, some scenes were cut in Japan.

Route Irish (2010) 109 min A film directed by Ken Loach that tells the story of an ex-security contractor (euphemism for mercenary) who rejects the official version of his friend’s death and sets out to discover the truth by whatever means. Like all previous Ken Loach’s films, this work has also generated great controversy by illustrating how private security firms run amok in countries like Iraq and Afghanistan, while making fortunes. After receiving legal immunity privileges that effectively allowed them to shoot first and neglect to ask questions later, these private firms are known to have committed a great amount of abuse against both the Iraqi people and their own employees. 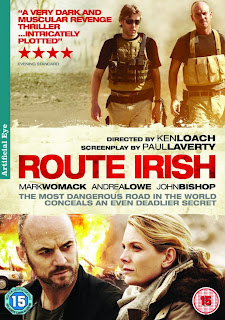 Loach rejects the supercharged style of film-making that a Hollywood kind of director might have employed. The keynotes are clarity and simplicity, even shouting confrontations and violence are shot in a calm, detached way. The film explore moral and ethical issues such as the wide use of torture by Iraq occupying armies and whether it is right that warfare should be gradually privatised without public debate which would mean those at the heart of warfare are only answerable to shareholders rather than a government. 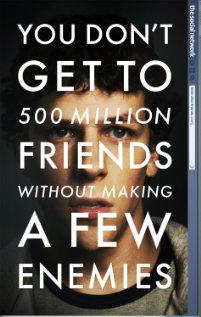 The Social Network is a 2010 American drama film directed by David Fincher and written by Aaron Sorkin. Adapted from Ben Mezrich's 2009 book The Accidental Billionaires, the film portrays the founding of social networking website Facebook and the resulting lawsuits. It stars Jesse Eisenberg as founder Mark Zuckerberg, along with Andrew Garfield and Justin Timberlake as the other principals involved in the website's creation. Neither Zuckerberg nor any other Facebook staff were involved with the project, although Eduardo Saverin was a consultant for Mezrich's book.[3] The film was released in the United States by Columbia Pictures on October 1, 2010.
The film received widespread acclaim, with critics praising it for its editing, acting, score and screenplay. Some people, including Zuckerberg himself, criticized the film for its many inaccuracies. The Social Network appeared on 78 critics' top 10 list for 2010; of those critics 22 had the film in their number one spot. Rolling Stone's Peter Travers said "The Social Network is the movie of the year. But Fincher and Sorkin triumph by taking it further. Lacing their scathing wit with an aching sadness, they define the dark irony of the past decade." It received eight Academy Award nominations, including Best Picture, Best Director (Fincher), and Best Actor (Eisenberg) and won three for Best Adapted Screenplay, Best Original Score, and Best Film Editing. It also won the Best Motion Picture – Drama Golden Globe at the 68th Golden Globe Awards. The film also won Golden Globe awards for Best Director, Best Screenplay and Best Original Score, making it the film with the most wins of the night.