"Divine Intervention" (2002, Palestine) is directed by Elia Suleiman
Language  Arabic and Hebrew with subtitles.
The film is made up of a series of interlinked sketches of everyday life which portray the devestating effects of the Israeli occupation on the lives of West Bank Palestinains.
The central character, a Jerusalemite played by Suleiman himself, is involved in a love affair with a woman from a neighbouring city Ramallah - made difficult by Israeli movement restrictions. 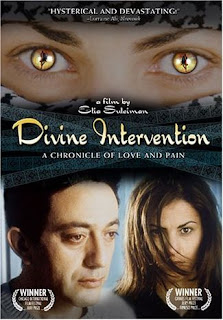 A surreal, black comedy - we are shown the absudity, anger, rage, and despair of Palestinains but also their stength of spirit.  The film ends with a wonderful, suprising specticale of resistance.
There isnt a great deal of dialogue - feelings and emotions are expressed in gesture, facial  expression, ideas and the state of affairs using symbol, metaphor and magical realism. For more information press here.
Will be hosted by Nicola

"The Experiment" is directed by the German film-maker Oliver Hirschbiegel.
The movie is based on the infamous "Stanford Prison Experiment" conducted in 1971. A makeshift prison is set up in a research lab, complete with cells, bars and surveillance cameras. For two weeks 20 male participants are hired to play prisoners and guards. The 'prisoners' are locked up and have to follow seemingly mild rules, and the 'guards' are told simply to retain order without using physical violence. Everybody is free to quit at any time, thereby forfeiting payment. In the beginning the mood between both groups is insecure and rather emphatic. But soon quarrels arise and the wardens employ ever more drastic sanctions to confirm their authority. 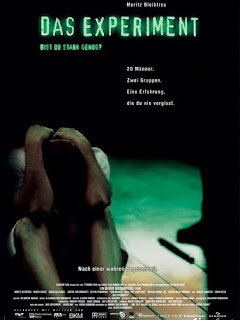 Will be hosted  by Christopher
Posted by Cinema Club at 10:27 No comments:

"Kontroll" is written and directored by the most famous Hungurian director Nimród Antal. It won the Gold Hugo Award at the Chicago International Film Festival and was screened in the Un Certain Regard section at the 2004 Cannes Film Festival 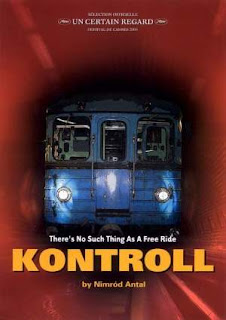 Plot: Ghost trains and ghostly characters, figuratively speaking of course, are what run through the perpetual night of this fictitious underground (metro) system. Bulcsú's (Sándor Csányi) life that once was, on the surface, where the real people go home after work, who go to the movies or a fine restaurant is now replaced by the dark, cold and solitude arena of his new dwellings. Him, and his motley crew of ragtag metro ticket Kontrollers must patrol the trains that run these City dwellers back and forth and with daily ritual, check that no one dare come down into their world for a free ride. With indifferent passengers, a possible love interest, a regime set on competition and to top it all a mysterious serial killer at large, Kontroll is a dark and bleak comedy of the world of the ticket inspector, who, in the end must keep this Metro system running. If not, what would be the worst that could happen, if they ever lost control? Dare you ride here for free, too?

Will be hosted by Aliz
Posted by Cinema Club at 09:38 No comments:

Spirited Away (Sento Chihirono Kamikakushi) Japanese film in 2001. This film was made by the Japanese animation director Hayao Miyazaki in 2001 and won in 2002 the Academy Award for the Best Animated Feature and one of the two Golden Bear awards in the Berlin International Film Festival. 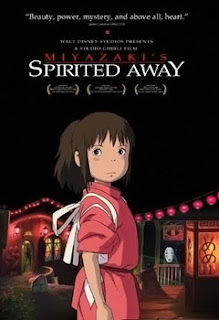 The film is about a ten years old girl’s experience in a wonderland. It depicts relationships between human beings and nature, cultural decay in excessive economy and to be grown up. This has been the best sold film in Japan so far.
This session is jointly hosted by the Welcoming International Cinema Club and the Film Group which Atsuko Betchaku has organised (see ‘Film Group’ in http://japaneseinstitute.jimdo.com/)
Posted by Cinema Club at 09:27 No comments: 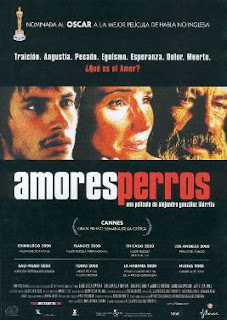 Three interconnected stories about the different strata of life in Mexico City all resolve with a fatal car accident. Octavio is trying to raise enough money to run away with his sister-in-law, and decides to enter his dog Cofi into the world of dogfighting. After a dogfight goes bad, Octavio flees in his car, running a red light and causing the accident. Daniel and Valeria's new-found bliss is prematurely ended when she loses her leg in the accident. El Chivo is a homeless man who cares for stray dogs and is there to witness the collision.

Will be Hosted by Kathleen
Posted by Cinema Club at 02:17 No comments: